You can find on this page the Houston airports map to print and to download in PDF. The Houston airport map presents terminals and gates of the international airport of Houston in Texas - USA.
Two airports serve Houston, Texas as its shown in Houston airport map; Houston Love Field (DAL) and Houston/Fort Worth Airport (DFW). Houston/Fort Worth Airportis the primary airport serving Houston, it is the largest hub for American Airlines. The airport is the fourth busiest airport in the world by aircraft movement, twelfth by passenger movement, busiest international hub in the United States, and second in Texas.Houston Love Fieldused to be the main airport serving Houston until Houston/Fort Worth International Airport (DFW) was opened. 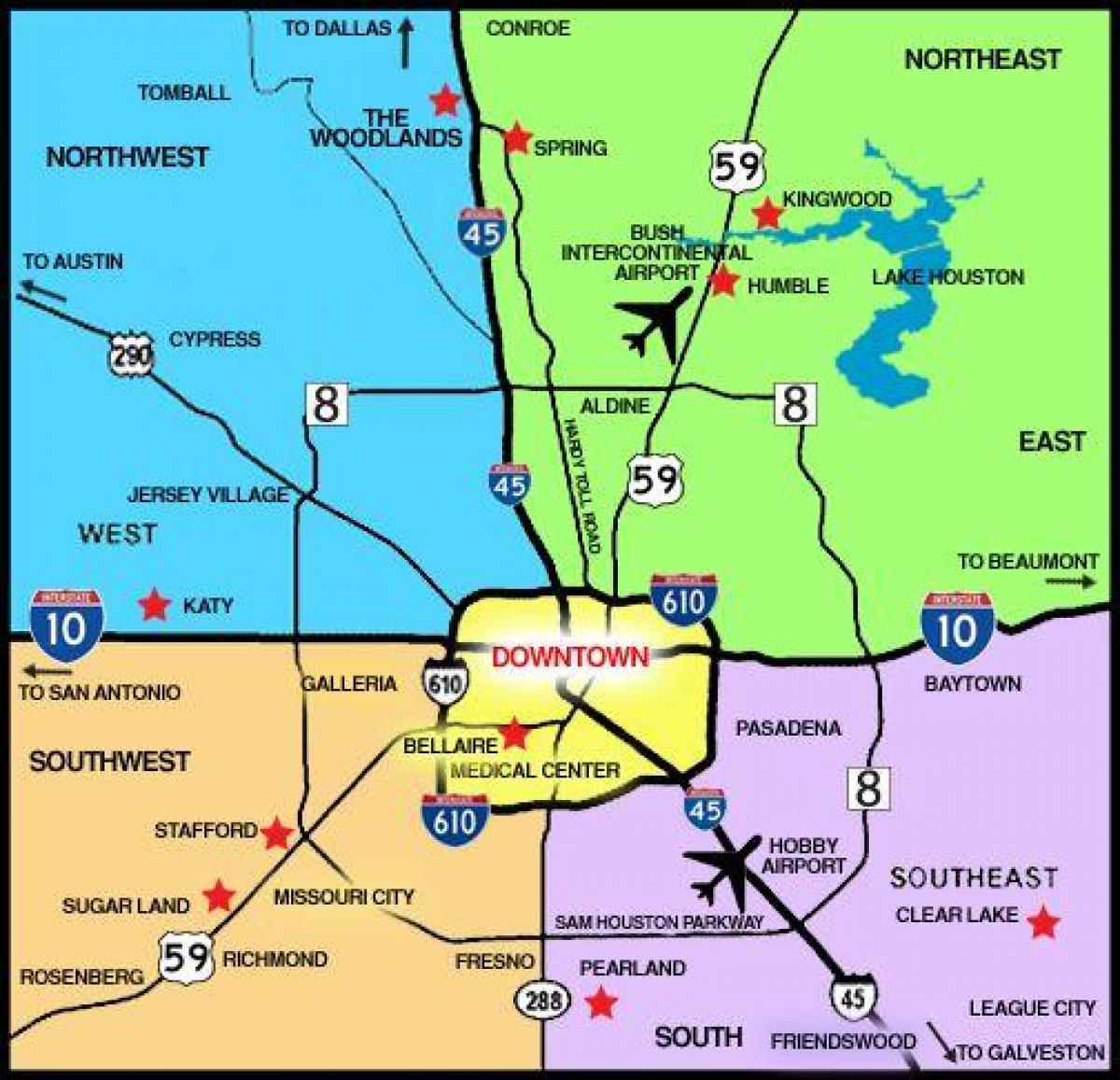 The second-largest commercial airport in Houston is the William P. Hobby Airport as its mentioned in Houston airports map (named Houston International Airport until 1967). The airport operates primarily small to medium-haul flights and is the only airport in Houston served by Southwest Airlines and JetBlue Airways. The third-largest airport and former U.S. Air Force base, Ellington Airport (formerly Ellington Field), is primarily used for government and private aircraft. At one point, Continental Express operated flights across the city to Bush Intercontinental primarily for residents of southeast Houston and Galveston County. Passenger flights ended on September 7, 2004.

The Federal Aviation Administration and the state of Texas selected the Houston Airport System, which manages Bush, Hobby, and Ellington, as Airport of the Year for 2005, largely because of its multi-year, $3.1 billion airport improvement program for both major airports in Houston. Andrau Airpark as its shown in Houston airports map, a privately-owned airport, was located in Houston until 1998; it was demolished and as of 2008 contains the Royal Oaks Country Club subdivision. The Houston Air Route Traffic Control Center stands on the George Bush Intercontinental Airport grounds. 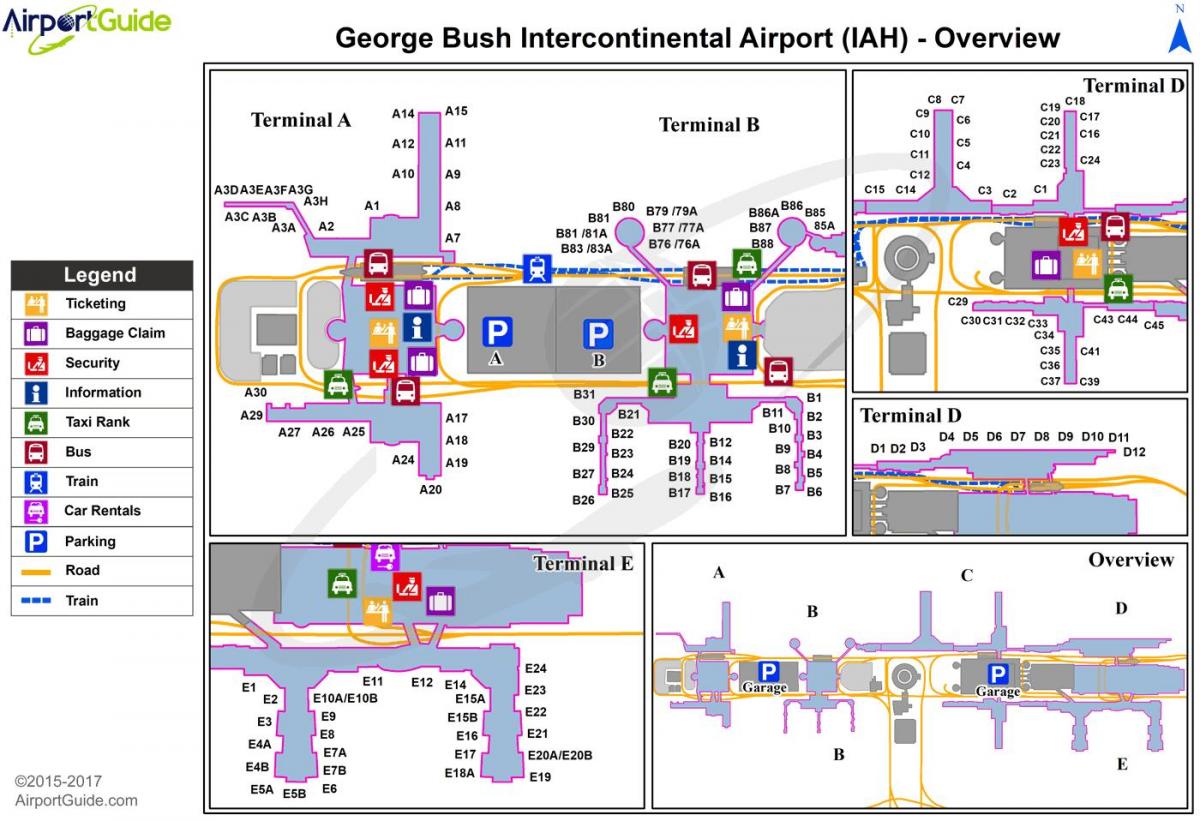 George Bush Intercontinental Airport, (IATA: IAH, ICAO: KIAH, FAA LID: IAH) is a Class B international airport in Houston, Texas--the United States fourth largest populated city, and serving the Houston–Sugar Land–Baytown metropolitan area, the fifth-largest metropolitan area in America. Located about 23 miles (37 km) north of Downtown Houston, between Interstate 45 and U.S. Highway 59 as you can see in Houston international airport map, George Bush Intercontinental Airport has scheduled flights to domestic and international destinations. The airport is named after George H. W. Bush, the 41st President of the United States. The airport houses an on-site hotel, a Marriott, between Terminals B and C and is accessible via the inter-terminal train. The hotel has 566 rooms, two restaurants, a cocktail lounge, a coffee shop and a conference center.

There are three main entrances into IAH terminal areas. John F. Kennedy Boulevard is the main north-south artery into the airport and intersects with Greens Road becoming an expressway leading to the terminals (by traveling east on Greens Road, one can access the nearby Greenspoint business and residential district). Will Clayton Parkway, which runs east to west, is another main road for IAH. The Hardy Tollway Connector runs from west to east connecting JFK Boulevard to the Hardy Toll Road. An above ground train called TerminaLink connects Terminals A, B, C, D, E and the International Arrivals Building (IAB) as its shown in Houston international airport map, for those with connecting flights in different terminals and provides sterile airside connections. This allows passengers to travel within the airport without having to re-enter security. TerminaLink has four stops: Terminal A, Terminal B, Terminal C, and Terminals D/E including the IAB.