You can find on this page the Houston topographic map to print and to download in PDF. The Houston elevation map present the topography, river and relief of Houston in Texas - USA.
Houston city stands about 50 feet above sea level—the highest area within city limits being 90 feet as its shown in Houston topographic map. The city once relied on groundwater for its water needs, but land subsidence forced the city to turn to ground-level water sources such as Lake Houston. 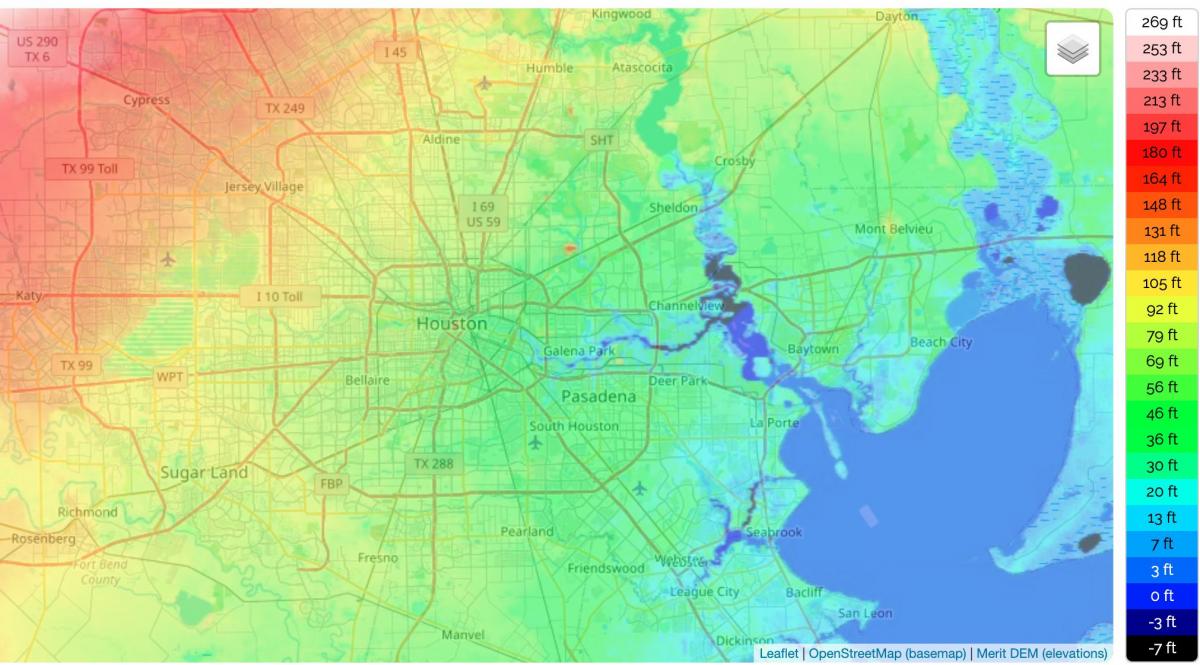 Houston lies largely in the northern portion of the Gulf coastal plain, a 40- to 50-mile-wide swath along the Texas Gulf Coast. Typically, elevation rises approximately one foot per mile inland. Northern and eastern portions of the area are largely forested; southern and western portions are predominantly prairie grassland; coastal areas are prairie and sand. Surface water in the Houston region consists of lakes, rivers, and an extensive system of bayous and manmade canals that are part of the rainwater runoff management system. Some 25%-30% of Harris County lies within the 100-year flood plain. Elevation ranges (a.s.l.) as you can see in Houston elevation map: Brazoria 0'-146', Chambers 0'-85', Fort Bend 12'-158', Galveston 0'-43', Harris 0'-310', Liberty 0'-269', Montgomery 43'-435', Waller 80'-357'.

Houston is located 165 miles (266 km) east of Austin, 88 miles (142 km) west of the Louisiana border, and 250 miles (400 km) south of Dallas. The city has a total area of 637.4 square miles (1,651 km2); this comprises over 599.59 square miles (1,552.9 km2) of land and 22.3 square miles (58 km2) covered by water. Most of Houston is located on the gulf coastal plain, and its vegetation is classified as Western Gulf coastal grasslands while further north, it transitions into a subtropical jungle, the Big Thicket. Much of the city was built on forested land, marshes, or swamps, and are all still visible in surrounding areas. Flat terrain and extensive greenfield development have combined to worsen flooding. Downtown stands about 50 feet (15 m) above sea level, and the highest point in far northwest Houston is about 150 feet (46 m) in elevation as its mentioned in Houston elevation map. The city once relied on groundwater for its needs, but land subsidence forced the city to turn to ground-level water sources such as Lake Houston, Lake Conroe, and Lake Livingston. The city owns surface water rights for 1.20 billion gallons of water a day in addition to 150 million gallons a day of groundwater.