You can find on this page the Houston trains map to print and to download in PDF. The Houston trains map presents the rail network and railway stations of the trains of Houston in Texas - USA.
The high-speed train that promises to transport passengers between Dallas and Houston in 90 minutes as its shown in Houston train map, has been approved by the Federal Railroad Administration, according to Texas Central Railroad, the company in charge of the project. 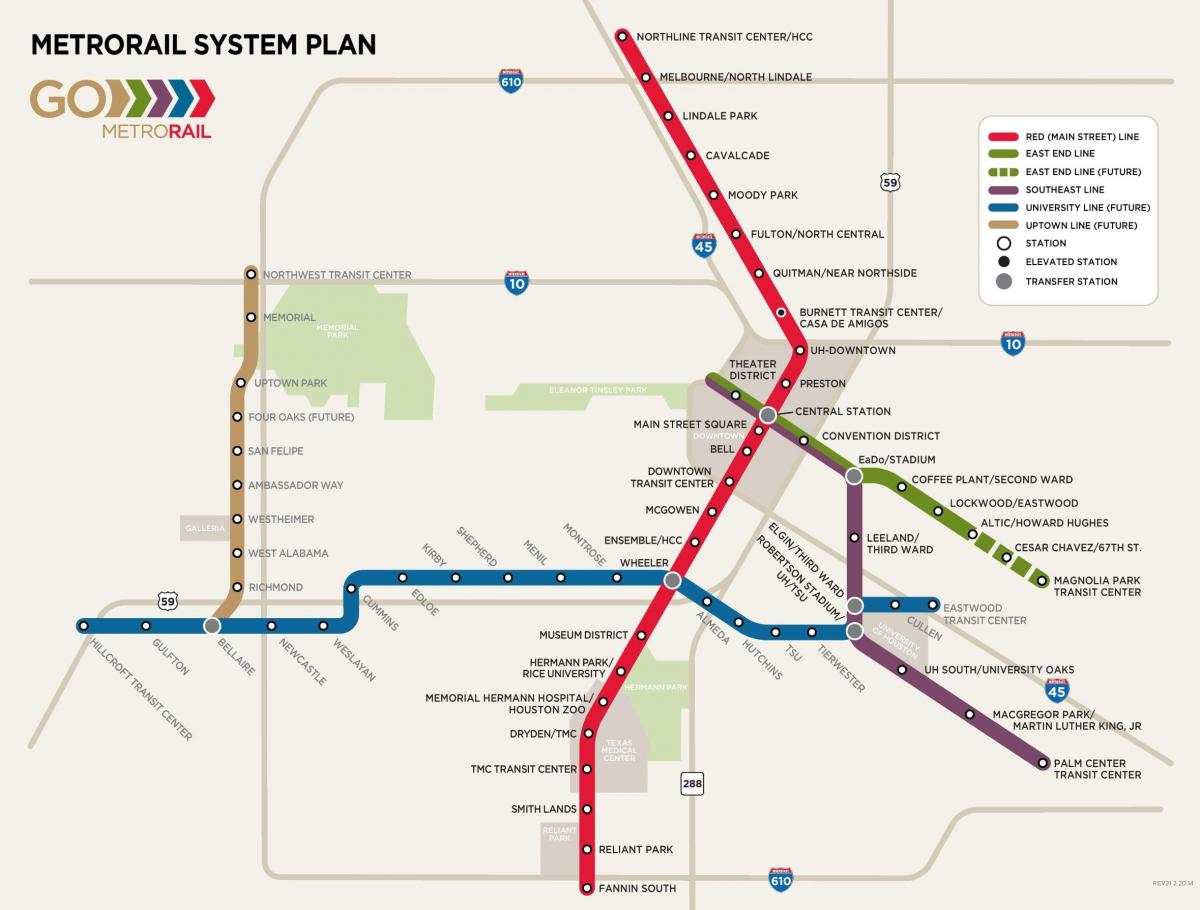 The below-ground Subway train provides transportation between terminals while outside security (pre-security). Departs every three minutes from the Subway stations in Terminals A, B, C, D/E, and the Airport Marriott. Free, operates every day from 3:30 a.m. to 12:30 a.m as you can see in Houston rail map. Closed between 12:30 a.m. and 3:30 a.m. Signs to the Subway stations are marked “Subway”. ​The trip time between one Subway station and the next is approximately 3 minutes. The first METRORapid route is the METRORapid Silver Line (route no. 433). It runs along Post Oak Blvd. connecting Uptown Houston to two major transit centers, where additional service is available to other areas of the Houston region.

If given the option, choose the METRORail. The light runs a little faster than buses during rush hour and comes more consistently throughout the day. If you are in a situation where you could take a bus or the train, take the train — especially if you are trying to go downtown or to the med center. Rain almost always means accidents. It rains often in Houston, and when it does, there are typically a large amount of motor vehicle accidents that cause bus and sometimes train delays. If the weather looks like rain, expect to spend a little more time getting where you need to go. You can walk faster than the train downtown. In downtown Houston, the train stops every few blocks as its mentioned in Houston rail map. If you are waiting on a train that is delayed — either because there has been an accident or it is late at night — walking can be faster if you do not have too far to go.

The recently expanded light rail provides service along nearly 23 miles of central Houston. The 13-mile Red Line runs from Fannin South Station through downtown along Main Street through the Museum District, the Texas Medical Center, University of Houston-Downtown, and ends at the Northline Transit Center/Houston Community College as its mentioned in Houston rail map. The Green Line (East End Line) runs 3.3 miles from downtown and east along Harrisburg, and the Purple Line (Southeast Line) travels 6.6 miles southeast connecting downtown from the University of Houston Central Campus to Texas Southern University and Palm Center. Tickets cost $1.25 (one-way) and can be purchased using cash or credit at all rail stops.