You can find on this page the Houston tram map to print and to download in PDF. The Houston trams map presents the network, zones, stations and different lines of the tramway of Houston in Texas - USA.
Since its inception, METRORail has been the source of several political controversies in Houston (see Houston tram map). During the 2003 expansion referendum, critics of the system, including Texans for True Mobility (TTM), questioned METRO financial practices. METRO itself was criticized for spending public funds for "educational advertisements" about the proposed system, which were said to promote the referendum. 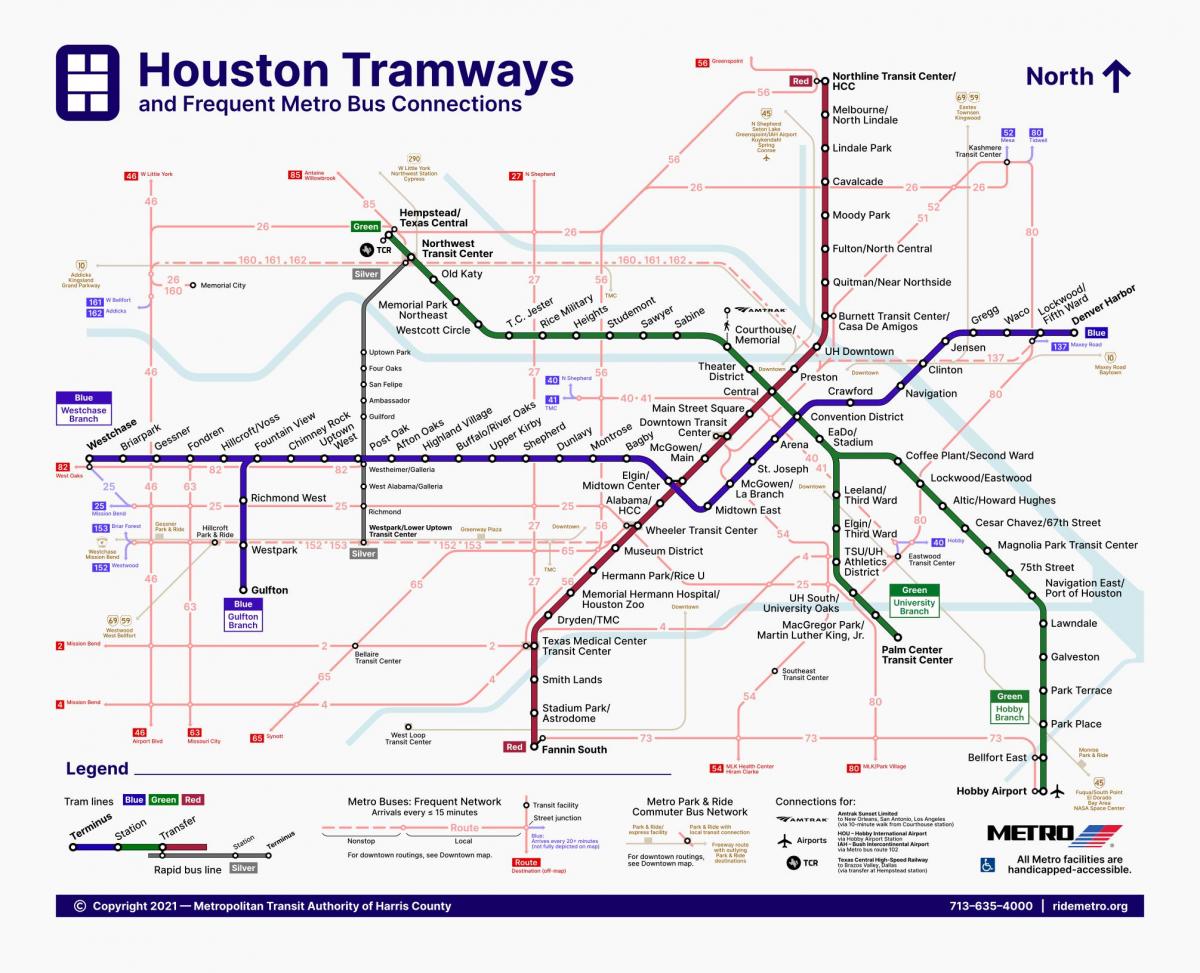 The first five tram lines and services are planned to be up and running by 2012 as its mentioned in Houston tram map. The plans call for: A northward extension of the Red Line past University of Houston–Downtown to open in 2012. The North/Blue Line from the Houston Intermodal Transit Center to the Northline Transit Center. The East End/Brown Line will extend east 4 miles (6 km) from downtown Houston to the Magnolia Transit Center by 2011. The Southeast/Green Line will extend 6.8 miles (11 km) from downtown near the Main Street line terminating around Palm Center at MLK and Griggs street. The University/Orange Line will extend 10-mile (16.1 km) from either the University of Houston or the Eastwood Transit Center to the Hillcroft Transit Center, and follow the Richmond/Wheeler and Westpark corridors with transfers to the Red line at Wheeler Station. Completion is projected for 2012.

METRO first light rail line is located in Houston, Texas, United States as you can see in Houston tram map. It is the second major light rail service in Texas following the DART system. The arrival of METRO light rail comes approximately sixty years after the previous streetcar system was shut down, which left Houston as the largest city in the United States without a rail system (since 1990 when the Blue Line opened in Los Angeles). Houston operates a fleet of 18 Siemens-built Avanto light-rail vehicles. Each 96-foot (29 m) long, double articulated vehicle has 4 low platform doors per side and has a capacity of 72 seated and 148 standing passengers. Supporters of an expanded rail system in Houston have leveled similar charges against opponents of the referendum, noting that suburban development interests largely bankrolled the PAC opposing the referendum.

The planned expansions are within the city of Houston and will eventually reach the two major Houston airports, George Bush Intercontinental Airport and William P. Hobby Airport. METRO is planning service to suburbs in Houston, as well as other parts of Houston. Alternatives Analysis and Draft Environmental Impact Analysis studies are currently underway on four extensions, but only one extension — the University Line — is planned to be opened by 2012. Though a slightly different from METRO Solutions (albeit a larger plan), the 2035 Plan for Houston is a joint project between METRO, TxDOT, and the Houston-Galveston Area Council (or H-GAC for short). It includes new bicycle routes, new bus routes, signature bus service, light rail expansion, and commuter rail expansion as its shown in Houston tram map. The 2035 Plan also includes a new Intermodel Station, to be built in Downtown. The Intermodel Station, Houston version of Union Station, will connect two commuter rail lines, two light rail lines, and multiple bus routes. It should be noted that not all of Houston light rail lines connect to the Intermodel Station.