You can find on this page the Houston buses map to print and to download in PDF. The Houston bus system map and the Houston trolley map present the network, stations and lines of the buses and trolley of Houston in Texas - USA.
METROBus lines in Greater Houston comprise 78 regular bus routes, and 75 of those run every day as its mentioned in Houston bus system map. A single ride on either METRORail or METROBus costs $1.25. 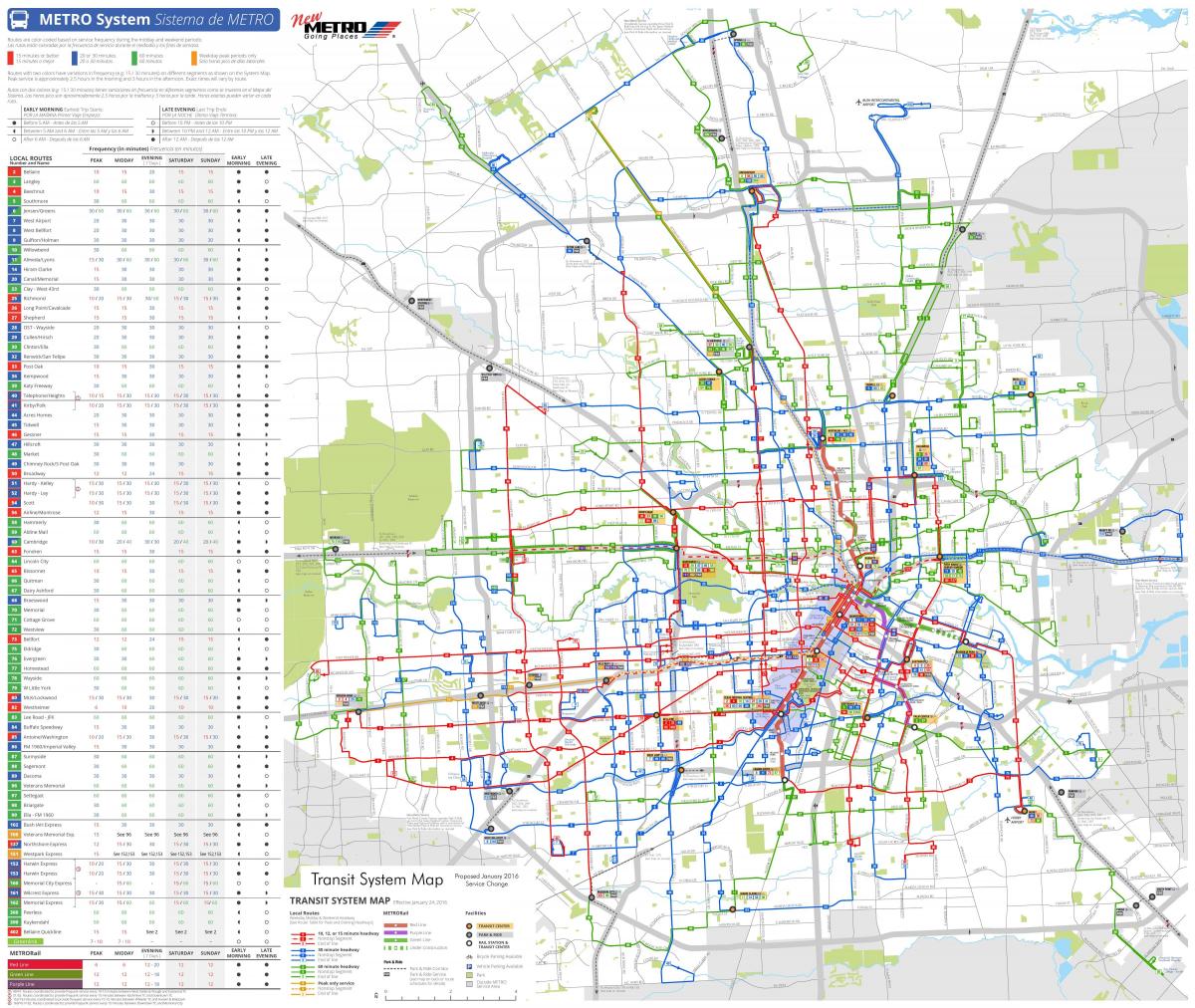 METRO has more than 1,200 buses as its shown in Houston bus map. With an extensive network of bus routes and convenient park-and-ride facilities helping to ease rush-hour commutes, the METRO Bus System keeps the Houston region moving. METRO is paving the way for a cleaner Houston with more than 440 transit diesel-hybrid buses in operation. Since 2003, METRO has been actively working to improve the air we breathe with state-of-the-art technology that reduces nitrogen oxide emissions by more than 50 percent and offers substantial savings in fuel. Hybrid technology is METRO current choice for vehicles, and each year, as part of its fleet replacement plan, METRO purchases 100 buses. The red network: These red routes are frequent routes with buses scheduled every 15 minute or less on 22 major routes, at least 15 hours a day – seven days a week. The blue network: These blue routes operate similarly to the red routes with buses scheduled every 16 to 30 minutes, 18 or more hours a day – seven days a week. The green network: These green routes offer buses every 31 to 60 minutes, at least 14 hours a day, seven days a week. This is designed to offer broad coverage in areas where there is light ridership.

Kerrville Bus Company operates from the Houston Greyhound Station in conjunction with Greyhound. El Expreso Bus Company operates services to a station in Houston adjacent to the Greyhound Station as you can see in Houston bus map. Tornado Bus Company operates services to two stations in Houston, with one along Airline Drive and one along Harrisburg. In the 1990s various bus companies began operations in the East End, serving Mexico and other parts of the United States from East End terminals. VivaAerobus, a Mexican airline, operated a bus shuttle between Austin-Bergstrom International Airport South Terminal and the Omnibus Mexicanos Bus Terminal in eastern Houston for VivaAerobus passengers on flights going to and from Cancun and Monterrey. On May 16, 2009, VivaAerobus stated it would cease passenger operations at Austin-Bergstrom International Airport on May 31, 2009. The airline blamed the pullout in part on the outbreak of the swine flu, which caused an unprecedented decrease in demand for service.

Local service runs mostly on city streets, stopping at every other corner along its route. Paying the $1.25 fare with your METRO Q® Fare Card, METRO Day Pass, or METRO Money, earns you free transfers in any direction for up to three hours. METRO local bus service runs mostly along city streets, making stops at every other corner along the designated route as its mentioned in Houston bus map. Routes are color-coded based on service frequency during the midday and weekends. Orange indicates weekday peak periods only, during rush-hour. METRO offers a 50 percent discount on all bus and light-rail service for students, seniors, Medicare cardholders and the disabled. Children ages five and under ride free. Free local bus and rail rides are offered to qualified veterans and to those serving jury duty. All METROLift customers are eligible for the METROLift Freedom Q® Card. Those serving jury duty also ride free.